Facts about aviation - past, present and future

Heathrow,like any other large economically active organisation, needs to play its part so that the UK meets its environmental targets.

Back Heathrow believes that the best way forward is to help build a sustainable airport that plays its part in tackling climate change while delivering jobs, skills and investment.

Putting to one side the economic benefits of expansion, figures from the government’s committee on climate change show that overall emissions fell by 5% between 2015-2016 and the UK is on target to meet its carbon budget targets.

Since 1990 UK emissions have fallen 43%, while the economy has grown over 70%, while carbon dioxide – the main greenhouse gas – is down 36 per cent.

On the other hand, the number of passengers rose by 7% and the number of flights increased by 4%. That is good news because the fact that emissions only rose 1% suggests other factors have limited the increase, like better flight seat occupancy; improved fuel efficiency and changes in airline routes.

Although transport accounts for 25% of emissions, this consists of mainly petrol and diesel cars and moreover new road projects will potentially make this worse.

Recently, the European Commission put together a document that states that aviation accounts for 3% of greenhouse emissions in the EU, and 2% globally. In an attempt to drastically reduce these emissions, the Carbon Offsetting and Reduction Scheme for International Aviation (CORSIA) has been established, which by 2021-2035 aims to offset 80% of emissions above 2020 levels. Read the whole document here. 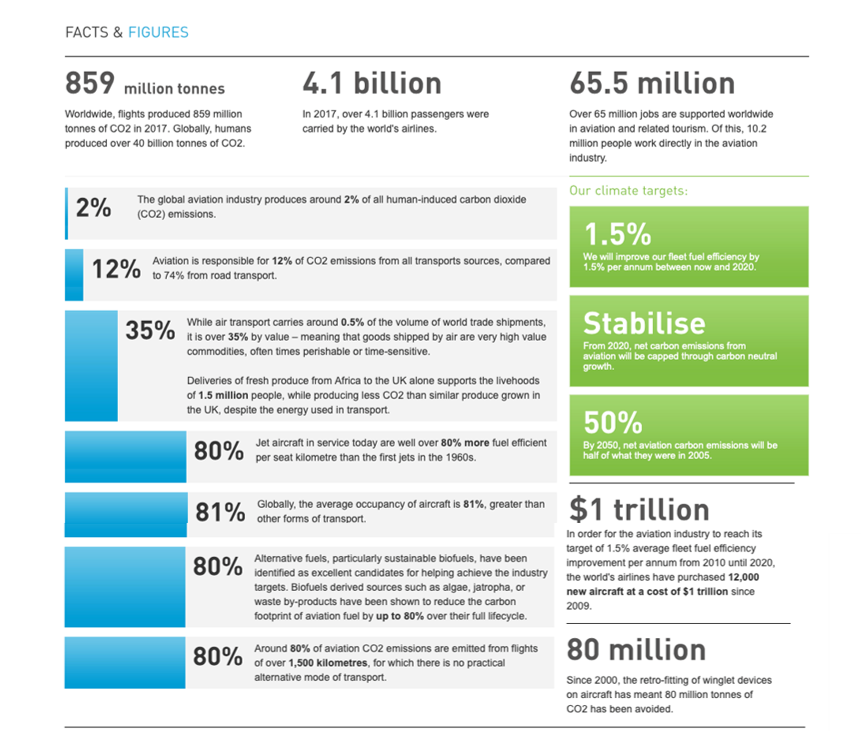 The Committee on Climate Change published a report in May 2019, which outlines targets for the UK to achieve Net Zero GHG emissions by 2050. They stress that this is a nation-wide movement - all sectors, government departments and policies need to reflect the task at hand, it is not enough for one industry (ie. aviation) to become carbon neutral). You can find the whole document here.