THE POLITICAL WILL TO EXPAND HEATHROW IS ALREADY THERE 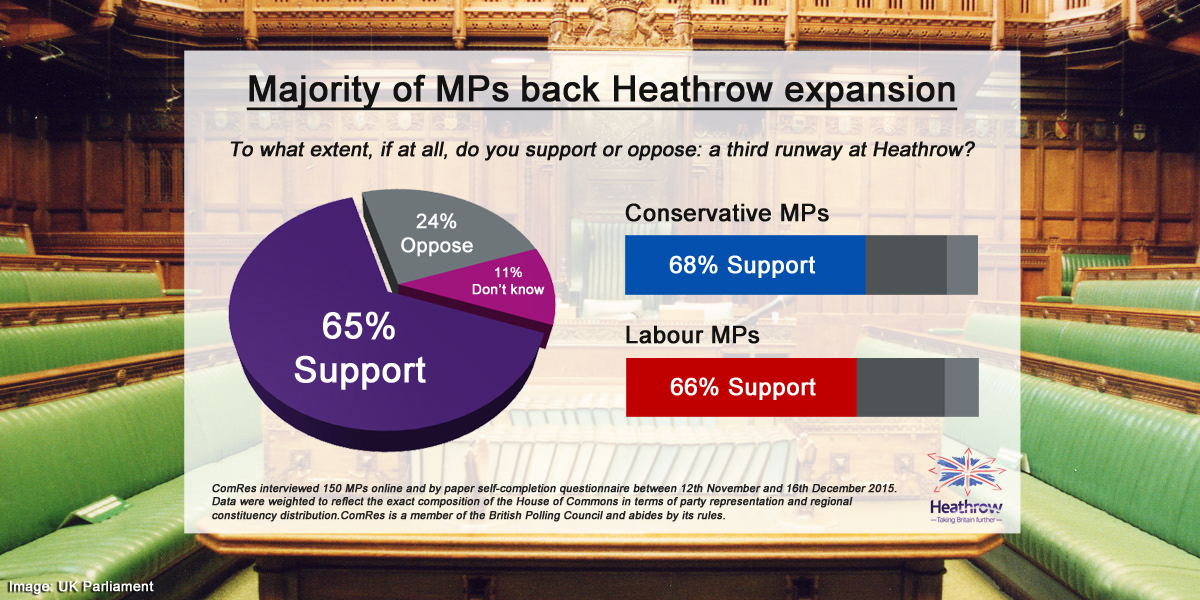 A new year brings new opportunities and all of us who back Heathrow expansion have reasons to be optimistic in 2016.

The government’s decision not to make a decision in December was obviously very disappointing, but polling shows that the majority of MPs from across all parties consistently back building a new runway at Heathrow. Clearly there is a desire and a will within Parliament to make Heathrow expansion happen – now the Government needs to get on and do it.

According to the latest ComRes poll, 68 per cent of Conservative MPs and 66 per cent of Labour MPs support expanding Heathrow whilst all MPs are twice as likely to say they strongly support a new runway at Heathrow than a second one at Gatwick. The majority of MPs also disagreed that an additional runway would prevent the UK from meeting its emissions targets.

This high level of support from politicians from across the political spectrum demonstrates that not only is expanding Heathrow economically essential, but also politically deliverable.

Some of the most high-profile anti-Heathrow politicians have had an uncomfortable couple of weeks over Christmas and the New Year; from Mayor Boris Johnson’s hypocrisy at investing £3.5 million of GLA public money in Heathrow despite being a well-known opponent, to Zac Goldsmith’s controversial comments which wrongly linked the Volkswagen emissions scandal with Heathrow air quality.

While Heathrow opponents flounder, support for expansion continues to soar. As well as huge political support from across all parties, Heathrow expansion is also backed by UK businesses, large trade unions and most local residents. Indeed, 82% of the 70,591 responses to the Airports Commission public consultation backed Heathrow expansion and most of those were from residents who live near the airport.

These local people are proud of their airport and want to see it thrive in the future. They know that expansion will create 77,000 new jobs in the region, including 10,000 apprenticeships from the boroughs neighbouring the airport which would be of enormous social and economic benefit to the local community.

2016 will bring a new set of challenges in the battle to provide greater capacity at Heathrow. But two of those challenges shouldn’t be demonstrating local support or political will for building a new runway; both of these have been repeatedly and overwhelmingly proven already.