Hot air but no answers from Heathrow’s opponents 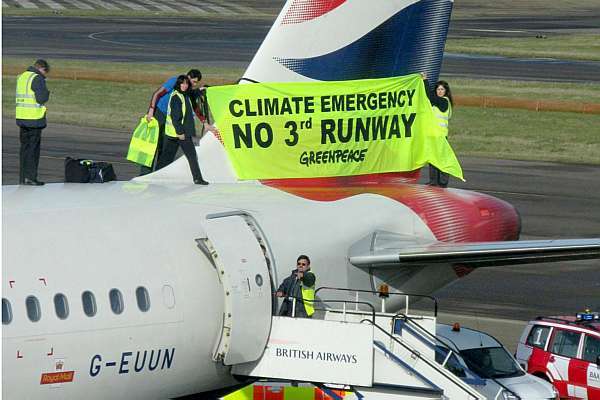 Hot air but no answers from Heathrow’s opponents

It was shocking but not entirely surprising to read last week that Greenpeace, an environmental group that urges us to stop flying, had been paying for one of its executives to commute by plane. More shocking was that Greenpeace’s UK director John Sauven refused to condemn this hypocrisy. As is often the case with anti-aviation protestors, it’s one rule for them and one for the rest of us.

The truth is that Greenpeace, like the rest of us, rely on air travel for work and leisure. Conference calls and virtual meetings will only take you so far; even Greenpeace have to go and meet their clients or colleagues eventually.

The key to the aviation capacity debate is balancing the needs of businesses and travellers to meet with their customers, friends and family (not to mention the jobs that this supports) with the emissions that aviation produces. Clearly supporting unchecked increases in capacity would be irresponsible. Whilst we back Heathrow’s growth, we would not do so at any cost.

Both Heathrow proposals submitted to the Airports Commission have pledged that any expansion would lead to fewer emissions being emitted in the future than there are today.

This might sound like a dream, but it is achievable. It might surprise you to learn that much of Heathrow’s emissions are not from aircraft, but the vehicles around the airport. Reducing this traffic is key to reducing emissions and congestion. Heathrow’s surface access is going to be rapidly improved with Crossrail connecting the airport to central London and western rail access and southern rail access both proposed in the next decade. By 2030 this would mean 36 trains per hour providing more than 12,000 seats for passengers compared to 18 trains per hour and 5,000 seats today. This would take thousands of cars off the road.

Heathrow Airport Ltd has also proposed a ‘congestion charge’ to encourage passengers to use improved public transport. It is only a suggestion and one which requires very careful scrutiny, but initiatives like this could have a real impact on pollution and congestion. You might expect some support from self-styled environmentalists but none came. Instead Zac Goldsmith called it ‘punitive’ adding “no London Mayor is going to grant permission [for the charge] without a fight.” In opposing measures that would benefit the environment and his constituents, he is simply cutting off his nose to spite his face. It is clear that Heathrow’s opponents are becoming more blinkered in their outlook; any proposal from Heathrow is automatically assumed to be bad.

We all know that aircraft are becoming more fuel efficient, which will mean less fuel burn and a corresponding reduction in emissions. What additional capacity will also bring is more space to land aircraft.

Heathrow is currently the world’s most congested airport, meaning that much like cars in a traffic jam passengers spend a lot of time either waiting on the ground to take off or circling in ‘stacks’ waiting to land. This time matters, circling over London is simply wasting fuel, polluting the atmosphere unnecessarily when the aircraft should be on the ground instead of hanging around.

Taxying on the ground also burns up a lot of fuel and the longer spent on the ground waiting to take off means more fuel burnt unnecessarily. A bigger Heathrow would be a better Heathrow. It would allow aircraft to take off faster and to land more quickly, spending less time queueing on the ground and much less time flying in circles waiting to land. This would lead to fewer emissions and better air quality for all of us. This would not be achieved by only expanding Gatwick or doing nothing.

Far from being the environmental disaster that many anti-aviation groups predict Heathrow expansion to be, it may actually reduce carbon emissions in the longer term. The Government’s Committee on Climate Change found that the aviation industry could increase in capacity by 60% whilst still meeting climate change targets.

We only back growth at Heathrow because we know this protects jobs and reduces the airport’s impact on the environment over time. It’s why more Greenpeace supporters should climb into aeroplanes instead of clambering on top of them.