Happy Valentine’s Day from Back Heathrow! 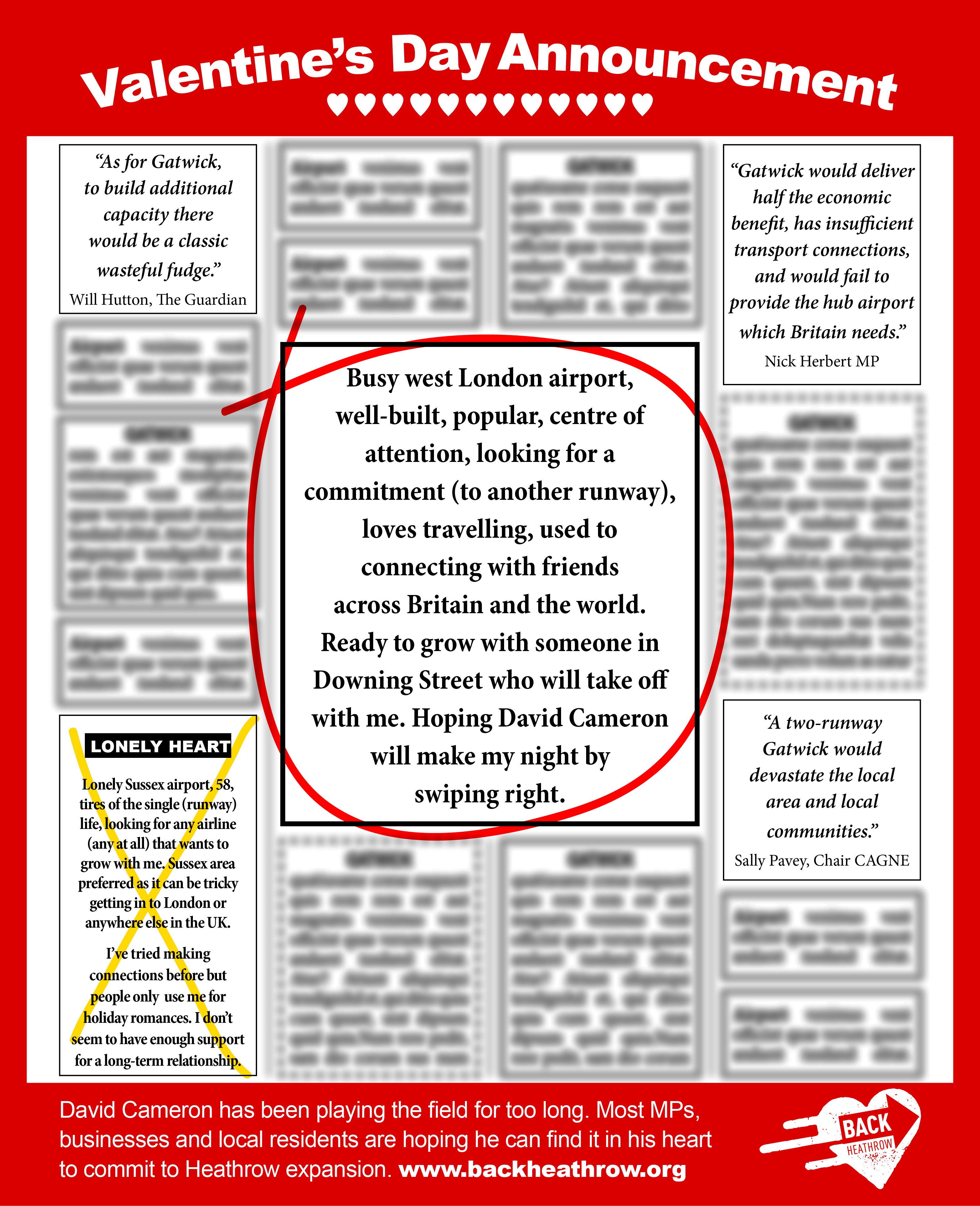 Love is in the air for many this Valentine’s Day but MPs, businesses and thousands of residents living near Heathrow are still seeking a commitment from a certain someone in Downing Street.

Millions of passengers at the UK’s only hub airport have also been kept up in the air by the Government.

Those who believe in Heathrow and its capacity to be both bigger and better are tired of feeling heartbroken by Government indecision. That’s why Back Heathrow has produced a special Valentine’s Day message for the Prime Minister which will appear in the Witney Gazette, David Cameron’s local paper, as well as in Private Eye, the New Statesman and the Spectator. You can also see the message here

The romantic message to the Prime Minister is from a “busy west London airport, well-built, popular, looking for a commitment (to a third runway)”. The optimistic airport signs off by “hoping David Cameron will make my night by swiping right”.

The advert also includes a desperate message from a “lonely Sussex airport, 58, tired of the single (runway) life, Sussex area preferred as it’s tricky getting into London or anywhere else in the UK”.

This message is obviously a bit of fun and we hope David Cameron enjoys it but it makes the serious point that when it comes to expanding Heathrow, the Prime Minister has to stop dithering and make a commitment.

The choice before David Cameron is not a difficult one: it is Heathrow expansion or doing nothing. Heathrow CEO John Holland-Kaye brilliantly exposed the threadbare argument for Gatwick in a speech earlier this week. After setting out the proposed case for a new runway at Heathrow, Holland-Kaye went on to say:

“But of course as Prime Minister, you have a choice.  You could choose the option that will not get us to emerging markets, which does nothing for the regions of the UK, or for exports, that delivers a fraction of the jobs or the economic benefits, is less financially robust, does not have the support of business or unions, nor the local community, nor the airlines, nor politicians, nor the policy basis of the Airports Commission.  That offers local people no respite from noise.  That has only one motorway and one railway line.

Heathrow is clearly the solution to the problem of aviation capacity in the South-East so, when it comes to airport expansion, David Cameron should stop playing the field and use Valentine’s Day to make a commitment to Heathrow.