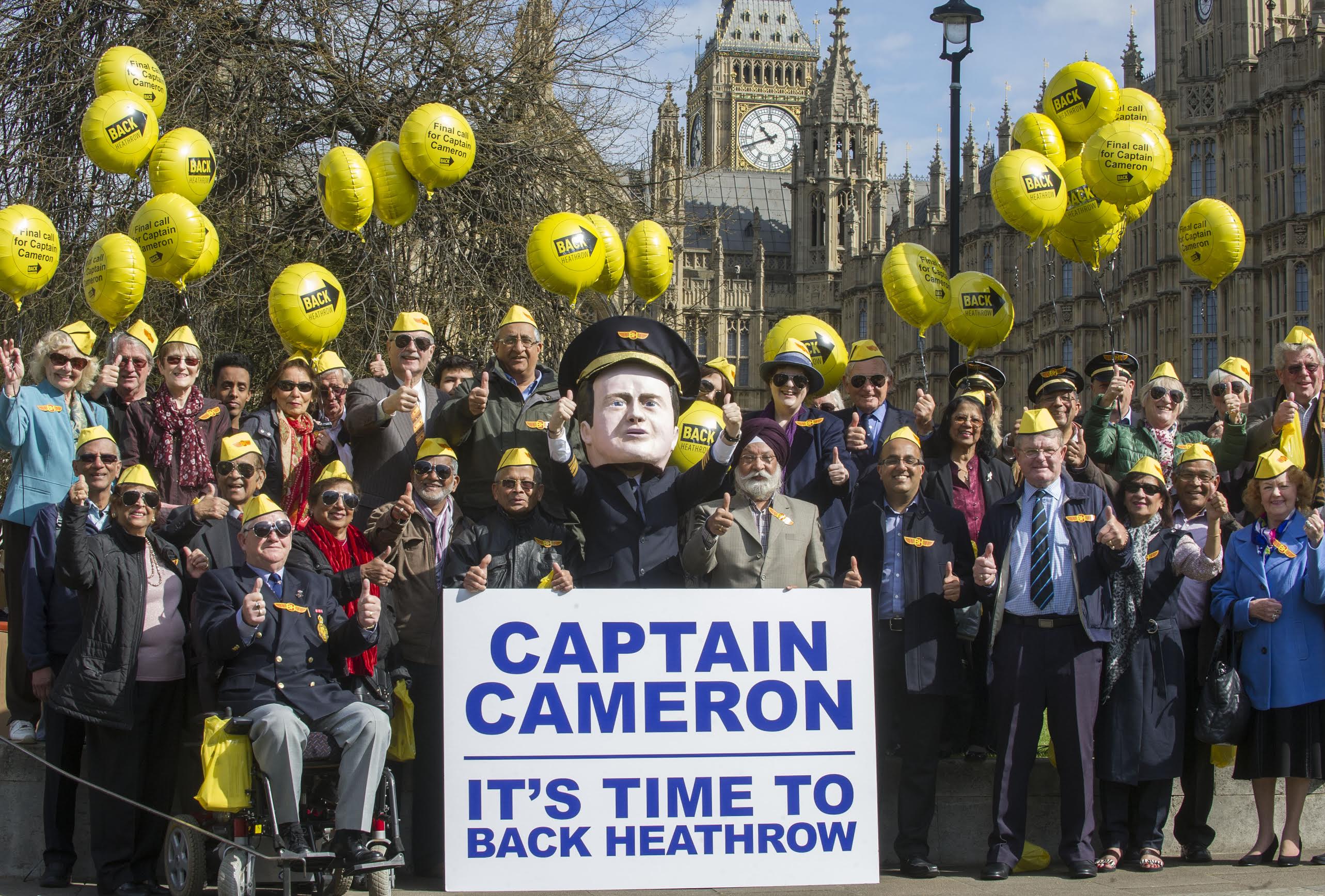 The aviator glasses glinted in the spring sunshine as a bouncing crowd of Back Heathrow supporters wearing yellow flight attendant hats gathered outside the Houses of Parliament on Wednesday. Living near Heathrow airport, these residents came to central London for a fun campaigning day with a serious message.

We were in Westminster to launch our new Captain Cameron campaign and to deliver a letter to the Prime Minister on behalf of 100,000 local residents who want a positive decision on Heathrow expansion and no more delay. Campaigners were joined by special guest Captain Cameron, in full pilot uniform, to call on ‘Captain’ David Cameron and ‘First Officer’ George Osborne to land Heathrow expansion and watch the UK take off.

First stop was College Green outside Parliament to meet the media for a photo-opportunity and interviews. Captain Cameron then led the way along Whitehall to Downing Street to deliver a letter to the Prime Minister (who looks uncannily like Captain Cameron).  The full text of the letter can be read here

The letter urges the Prime Minister to end the uncertainty surrounding airport expansion and give the green light to a new runway at Heathrow. It refers to the £211bn economic benefits and 180,000 jobs up and down the country which would come with Heathrow expansion. The letter also asks why the Prime Minister would risk huge protests in an unspoilt area of rural England by backing expansion at Gatwick, an option for which there is little support.

Captain Cameron was in high demand for photographs from tourists and passers-by but there was no time to waste before we headed off to the Department for Transport to deliver a letter to Secretary of State, Patrick McLoughlin, asking him to back Heathrow expansion and end the uncertainty for residents living near the UK's hub airport.

Our day in Westminster was hugely enjoyable and served to remind the Prime Minister that despite the looming EU referendum, the pressing matter of Heathrow will not go away. This was a final call for Captain Cameron. The Prime Minister now needs to show real leadership to land Heathrow expansion. A new runway at the UK’s only hub airport can be approved with confidence because it is backed by most local residents living near the airport, businesses, exporters, airlines, trade unions, regional airports and a majority of MPs. It’s been a long-haul but there must be no more delays.

Keep an eye out for our new campaign advert in the coming weeks. You can see it here