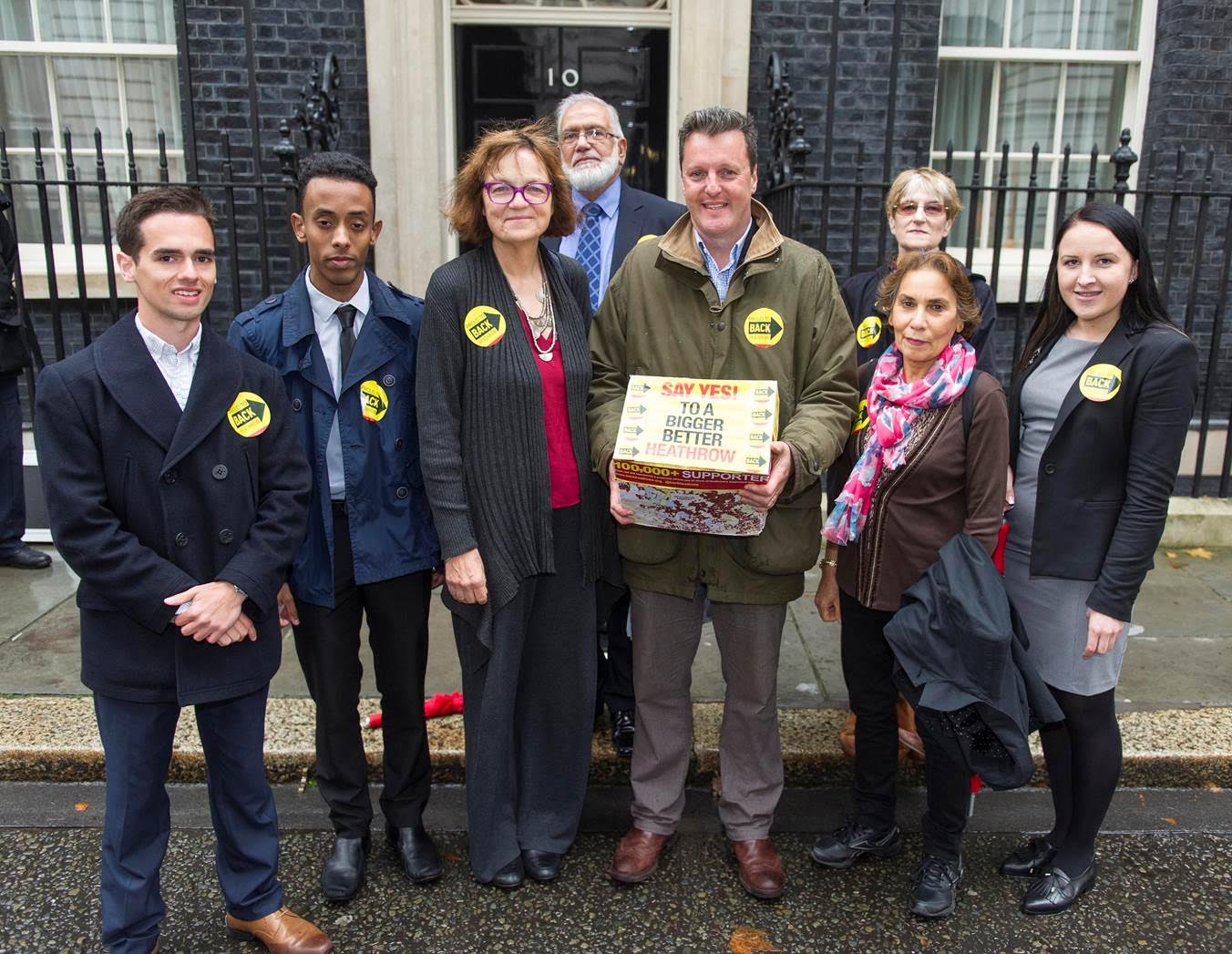 Campaigners from Back Heathrow visited Number 10 Downing Street this week to deliver some good news for the Prime Minister and his top team.

If David Cameron decides to support the recommendation of the Airports Commission in a few weeks’ time, he now knows there will be no shortage of welcoming voices from the residents of west London and the Thames Valley. Local businesses, residents and workers have waited nearly 10 years for a decision on Heathrow, and the vast majority want to see a growing and successful airport.

That was the message a delegation of campaigners and residents took to Downing Street this week, when we delivered the final batch of tens of thousands of postcards which have been sent to the Prime Minister over the past couple of weeks.

Our visit to No 10 is the latest evidence of local supporters far outweighing opponents. A hard core of opposition will remain but their numbers have been diminishing. Sadly some anti-expansion protestors have turned to unpleasant tactics, including threats to individuals and unsavoury abuse on social media.

For years the media and politicians have been sold tall tales of a local population uniformly opposed to expansion, but it is now clear that this was a myth. This is backed by hard evidence in the Airports Commission public consultation. No less than 82 per cent of all responses backed Heathrow expansion. More than 53,000 responses came from local residents who support growth at Heathrow. Submissions from opponents of expansion numbered just a few hundred.

Polling by Populus tells the same story. These large polls, of 1,000 respondents in each of the 12 constituencies near Heathrow show pro-expansion supporters easily outnumbering opponents. This popularity is being felt in Westminster where MPs are lining up to back expansion at Heathrow.

Chairman of the Conservatives’ influential 1922 Committee Graham Brady said that now is the “perfect moment” to overcome the political indecision on expansion and to reap the benefits. He estimates that 600 out of 650 MPs would vote in favour. Meanwhile, the Chancellor of the Exchequer George Osborne told the CBI that when it came to the Airports’ Commission’s recommendation, “we’re going to take the decision and get it built.”

Opponents of Heathrow expansion have a right to be heard, but they should not bully those residents who disagree with them. Thousands of our supporters joined the campaign because they are fed up of being shouted down by a vocal minority.

The Back Heathrow campaign has already proven that the majority of people in west London and the Thames Valley support expansion at Heathrow. Our supporters, their friends and relatives will continue to make their voices heard. Now we need the Prime Minister and the Government to listen.