Back Heathrow gets to business 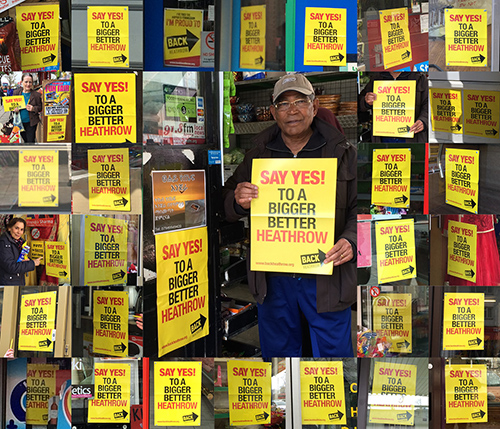 From Hounslow to Hillingdon and from Brentford to Uxbridge,
businesses are backing Heathrow.
By Pedro Diogo

Your local greengrocer might not be the first business that springs to mind when thinking about who needs Heathrow but in the communities around the airport, thousands of small businesses indirectly rely on it to succeed. Whether you’re buying Dutch flowers from your local florist or sipping a cup of Colombian coffee – Heathrow probably played a huge part in making that possible, and hundreds of businesses have been in touch with us to voice their support for growth at the UK’s hub airport.

Recently, Back Heathrow volunteers decided to pound the streets of west London to meet these businesses – and find new ones – who rely on Heathrow. The response was fantastic: nine in ten high street businesses, from West Drayton to West Ealing and from Southall to Staines, told us that the airport enriches their local communities and plays a major role in the economic success of town centres in west London.

Many wanted to get involved in the campaign and to show their support for a bigger and better Heathrow. The easiest way for businesses to do this is to put up Back Heathrow posters in their shop windows – and over 200 did this in just a couple of weeks! Every high street our volunteers visited demonstrated overwhelming support for our campaign. The image above shows just a few of the hundreds of businesses supporting Heathrow expansion in the boroughs around the airport.

We know how big a role Heathrow plays in the local economy. The airport handles over £86bn of UK goods each year – as much as Southampton and Felixstowe ports combined – connecting local businesses on its doorstep with the world’s markets. It’s no wonder that 32 chambers of commerce, representing thousands of businesses, including many from Hillingdon, Windsor, Hounslow, west London and the Thames Valley are backing Heathrow to grow.

Since we started the campaign, business owners from the communities around the airport have been in touch to pledge their support for growth at Heathrow. They want to feel the benefits of expansion – including up to 180,000 new jobs – meaning an opportunity to grow their businesses alongside the airport. Economic benefits for the UK could reach £211bn, securing jobs and 10,000 apprenticeships for local people if Heathrow is allowed to expand.

The future of Heathrow and that of local communities are intrinsically connected. A bigger and thriving airport gives our high streets the chance they need to grow and succeed. That’s why over 100,000 residents alongside businesses and local organisations have joined our campaign to back Heathrow.

If you run a local business and support growth at Heathrow, please get in touch if you would like us to send you a pack of materials to show your support for a bright and successful future for Heathrow and our local communities.