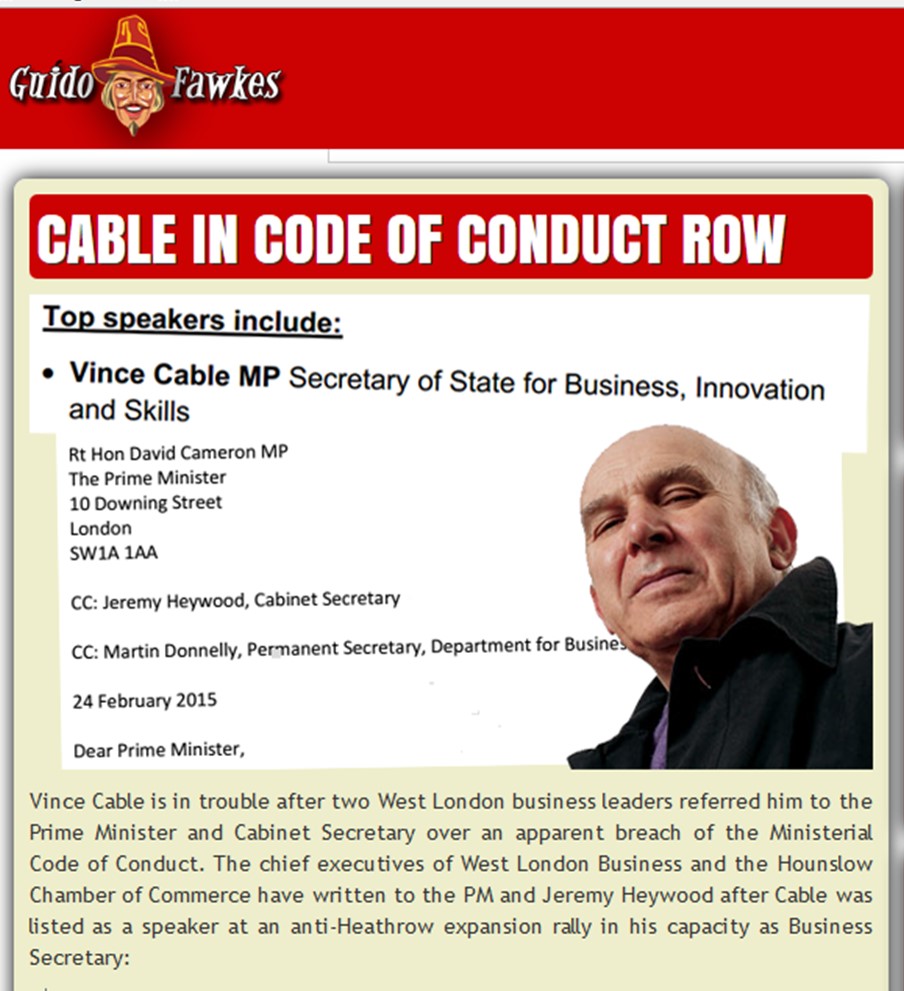 Organisers of a controversial anti-Heathrow rally will have red-faces today. This morning it was reported that Vince Cable is in trouble because two west London business leaders have reported the Secretary of State to the Prime Minister for an apparent breach of the Ministerial Code of Conduct.

Anti-Heathrow expansion group HACAN has being trying to put together a ‘Rally Against the Runway’ to draw together a few hundred people in central London next week. Heading a line-up of the usual suspects dominated by the ‘green blob’ is the Secretary of State for Business, Innovation and Skills.

This billing is highly unusual as the Ministerial Code makes it very clear what Ministers can do as a constituency MP, and what they can’t do as a Minister. The Code is there to make sure that Ministers are doing what is right for the entire country, rather than just for the constituency that they represent. Section 1.2 (h) of the code is very clear:

This week, the Chief Executives of both Hounslow Chamber of Commerce and West London Business, representing thousands of businesses in west London, wrote to the Prime Minister to complain that the Minister responsible for business, manufacturing and exports appears to be using his official position as Secretary of State for Business, Innovation and Skills to campaign against Heathrow expansion.

It is no surprise that the CEOs are unhappy about Vince Cable’s impending appearance as Business Secretary at next week’s protest when businesses are overwhelmingly in favour of expansion at Heathrow. In their letter to the Prime Minister, which you can read in full here, they make clear that more than 30 Chambers of Commerce representing many thousands of businesses throughout the UK support expansion at the airport, alongside bodies like the EEF which represents UK manufacturers.

When this story broke earlier today, HACAN immediately acknowledged that Dr Cable wasn’t speaking as Secretary of State, claiming it was an ‘error’. But if this is true, why did they ignore the same warnings that we gave them in early January, seven weeks ago? Why did they then go ahead, taking out full page adverts in local newspapers advertising the top speaker as ‘Secretary of State’ and ‘Cabinet Minister’? Why did Vince Cable retweet a flyer promoting the rally clearly showing him topping the speaker line-up as Secretary of State?

HACAN should have made clear from the start that Dr Cable was appearing as a local MP, rather than trying to overstate support for their rally. How on earth could the UK’s business secretary allow his privileged position and title to be used to promote an event that is so anti-business and anti-growth? We may never know because today he is busy opening the International Festival for Business which helps UK companies export in a global marketplace. You couldn’t make it up.